In 1757 George Goodwin (1719-1773) of Coalbrookdale, Madeley a Master Collier and partner in The Madeley Wood Company agreed to pay £250 in building a dwelling house and other convenience with a garden on the upper part of a meadow. Goodwin covenanted to maintain the house when it was built. The land was owned by Samuel Sprott of Ludlow, Doctor in Physic. George Goodwin paid Sprott £30-9-0 for his consent.George Goodwin died in 1773 age 54 and is buried in Madeley Church

The Ironbridge was built in 1779

At some point Sarah Darby bought Severn House, we don’t know when but some people say it was in 1803 which does not agree with other thing we have read. Sarah Darby was the daughter of Abraham Darby II, she was a spinster and she left the house to her niece Ann Darby (who was the eldest daughter of Abraham III and married to Barnard Dickinson) in 1821. Abraham Darby was said to have visited on many occasions.

Henry Dickinson became a wealthy man because he had shares in The Coalbrookdale Company, and Iron works in South Wales, and also was involved in banking, and he bought land north of Shrewbury (Little Ness)

On 29th October 1855 Henry's wife Deborah died aged 45. Her death came as a great shock and the Coalbrookdale works were closed on the day of her funeral. Under the marriage settlement Henry continued to receive £1,000 per annum for life from Deborah's shares in The Coalbrookdale Company. In 1858, three years after Deborah’s death Henry married Susannah Hadwen, daughter of Isaac Hadwen a Liverpool banker.

In the 1851 census the property is occupied by Henry Dickinson age 39 proprietor of land and mines, and Deborah his wife aged 40.

In the 1861 census the property is still occupied by Henry Dickinson and his new wife Susannah age 30,- an ironmaster employing 500 men and boys, born Salop, Madeley, and their son Henry age 1, and a son not named, age, 10 days. 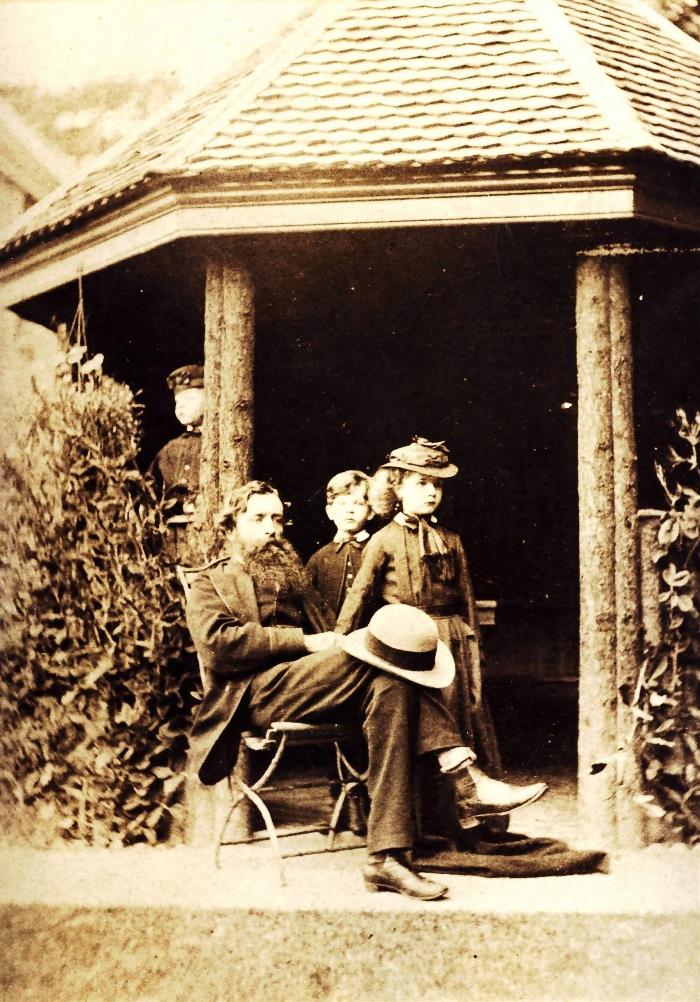 He is listed as an encaustic Tile manufacturer, employing 140 men and 40 females in Ironbridge and was married to Grace

Arthur Maw's father John Hornby Maw, was a surgical instrument manufacturer who made his fortune by the invention of the baby's feeding bottle. Arthur Maw was regarded as an authority on encaustic tiles, this being illustrated by his contribution of an article on encaustic tile manufacture for the ninth edition of the Encyclopaedia Britannica published in 1879.

The Maws exhibit for the 1893 World Fair in Chicago was 38ft long by 15ft wide and 20ft high the shafts of the columns being 12ft high and was divided by screens into a bathroom, part of a church chancel an area showing decoration suitable for public buildings and a display area for pots and vases, each of which was tiled and decorated with Maws products.

Arthur Maw’s brother George lived in Benthall Hall and was renowned for his knowledge about the crocus. He travelled all over the world and brought back samples. He used to write letters to Charles Darwin about his theories on evolution.

The fireplace which is featured in the Jackfield Tile Museum and also in various publications is in Room 18 in the Hotel, it is said to be unique, and is a good example of his work.The Hotel entrance hall has a tiled floor now covered by carpet.

The tiles on the walls of the entrance hall and staircase of the Hotel were made especially for the job and were installed in about 1890 by Mr Robert Henry Clarke, who was born in Ironbridge, a craftsman who worked for the Maws, but moved to Stockton on Tees in 1903 where he died in 1945 aged 70 years. We have been told that these tiles are unique as the Maws destroyed the moulds once the tiles had been installed.

At the height of the tile boom the company was producing over twenty million tiles and other items per year, in 9,000 different designs and supplying countries all over the world. To help sell this phenomenal quantity of ceramic ware the company used lavishly printed catalogues which showed the total range of their products the majority of which were available in different colours to order.

Born on Lincoln Hill in Coalbrookdale on 22nd December 1843, where his father (Thomas Wheatley Parker) and several generations before him had been employed by The Great Coalbrookdale Iron Company. When Thomas was just nine and a half years old he began work at his father’s foundry, lighting the fires and preparing for the foundrymen, who started work at six o’clock. He started work at half past five, and was paid two shillings for a sixty hour week. He took every opportunity to improve his education, and during the week he attended evening classes, and went to bible class each Sunday. He soon became a moulder himself and by 1862 his weekly wage had increased to a sovereign. In that year he was one of four workmen chosen to represent the Coalbrookdale Iron Company at the International Exhibition at South Kensington, on the company’s stand.

Thomas Parker was known as “Honest Tom” and had a son called Thomas Hugh Parker who was also an engineer and inventor and it is therefore difficult to ascertain exactly who can be credited with what inventions, we have found out the following about a truly remarkable man, but also some things of interest about his son who was known as “Young Tom”

Dates of interest in Thomas Parker’s life include:-

1881 (Age 38) Responsible for the first electric tramway in the world at Portrush, Northern Ireland. Powered by the first hydro electric generator.

1882 Shared the invention of the Plante Battery

1882 Founded the first company in The Midlands to manufacture electrical equipment in Commercial Road, Wolverhampton - in parnership with Mr Paul Bedford Elwell

1889 Designed the first electric locomotive for the Birmingham Tramways

1891 Made the first electric omnibus to run in London, from Charing Cross to Victoria, at 7mph

1893 The firm of Elwell and Parker was reconstituted as The Electric Construction Company.

1893 Responsible for the electrification of the South Staffordshire Tramway

1893 Responsible for the electrification of the Liverpool Overhead Railway for which he was awarded the Stephenson Medal and the Telford Premium by The Institute of Civil Engineers.

1894 Founded the firm of Thomas Parker (Ltd) in Wolverhampton

1898 Contested Kingswinford seat of Parliament for the Liberal Party

1899 Responsible for the electrification of the first underground railway in Great Britain, a section of the London Metropolitan Railway, as a result he was invited to join the Board of Directors of this company.1904 Awarded two gold medals by the smoke abatement society for his work against air pollution. One for his invention of the Kyrle Fire Grate and one for his invention of the distillation of coal by low temperature method to produce a smokeless fuel.

1905 He urged the necessity of decimalisation of the English weights, measures and currency and did much to promote a decimal system of his own creation.

1907 Bought Severn House and the Court Works in Madeley

1910 Patented the forerunner of the jeep

In 1904 Thomas became interested in the Metric System, with the inch as the unit. He was a keen advocate of decimalisation, and produced a 1 inch aluminium cube, weighing exactly the same as one cubic inch of water, at 4 degrees centigrade. This was to be the primary unit of linear, square, and cubic measurement, and also of weight.

Because of his radical political views, he refused the possibility of a knighthood. In 1908 he retired to Severn House, Coalbrookdale, but he retained his keen interest in science, and equipped a laboratory and workshop in his house so that he could keep abreast of modern developments.

Thomas Parker apparently died in Severn House on 5th December 1915, aged 72. He was survived by his wife Jane. Jane was born in 1848 and died in 1921. They are interred in the Fletcher family vault at Madeley Parish Church.

Severn House then became the property of Mr C B King, (son in law of Thomas Parker), he sold it to Mr Bishop “a farmer in the area”

Severn House was converted to a Hotel in 1939 by Wrekin Brewery, when we think the tenant was Donald Scott-Booth. Mr. Arthur Fletcher was manager from 1957 to 1972. Alterations were made to the bars of the Hotel in 1972 when Mr. Ron Neighbour was manager, we understand that he was not here for very long. Mr Pepe Allach managed and then owned the Hotel from approximately 1972 to 1988 having bought it at some point from Greenhall Whitley Brewery.

We have a much more detailed "History Booklet" available in the Hotel, if anybody is more interested in any of the information we have provided here

Ben Simpson the Grandson of Arthur Maw has written a book covering the history of both the maws family and the Simpson family and covers the part the Valley hotel played.

If you are interested in buying a copy of this book please visit http://www.simpson-heritage.uk.